Reiwa , 令和, is the name of the era just begun as Emperor Akihito abdicated to his son, Naruhito on May 1, 2019. It has stirred some controversy, as the first kanji, 令, can be translated as command. This has caused some concern as to the intended connotation and possible implications of this choice made by the government.

As written in this Reuters article, the character 令 is “often used to mean 'command' or 'order,' imparting an authoritarian nuance that offends some.”
https://www.reuters.com/article/us-japan-emperor-calendar/whats-in-a-name-japan-puzzles-over-reiwa-the-term-for-new-imperial-era-idUSKCN1RE0KW 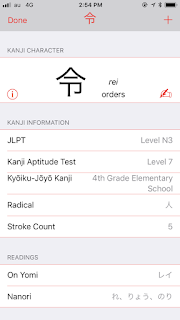 My kanji app did define it as orders.


Those voicing concern over the implied meaning of 令和note the hawkishness of the current administration, as well as the family ties of some government officials (including Prime Minister Abe) to Japan's military past, especially World War II and events leading up to it. Critics voice the worry that Japan could become aggressive. In my view, a newer development is been President Trump's unpredictable statements and behavior, since it has been America's role to protect Japan during its pacifist days, as established by the Constitution of 1947. Although he and PM Abe seem to have a cordial relationship, the U.S. President has expressed the notion that Japan may have to defend itself, as can be seen bout 0:42 into this video, just before the choir rendition of the Stones' “You Can't Always Get What You Want.”
I'd prefer not to embed the video, but the link is:
https://www.youtube.com/watch?v=xoXdWgMLZRg


Anyway, the only point I mean to make is that if a pacifist nation's protective ally makes its military defense sound uncertain, it's natural for the pacifist nation to want to build its own defense. Having said that, I hope that Japan remains pacifist. But I guess we'll see...

So PM Abe and his administration has been sensitive to concerns about the nuance of Reiwa , 令和, which is nice, and I'm glad of it. They've defined it as “beautiful harmony.” This article from the Japan Times explains it more extensively. Abe offers the more complex definition, that of a “culture born and nurtured as people’s hearts are beautifully drawn together.” I'm not sure how you get all that from 令和, but I guess that's his interpretation.
https://www.japantimes.co.jp/news/2019/04/03/national/japan-assures-world-reiwa-beautiful-harmony-nothing-command/#.XMpvTqSRU2w


And little did I know, despite living in Tokyo, there were massive celebrations. I was at home watching Game of Thrones.

Some videos about the background of 令和:


This lady talks a bit about the Reuters article at the link at the top of this post.

Finally, how to write the kanji: